The WISeNet Student Seminars are held during the fall semester and presented by current WISeNet students.  These seminars provide students the opportunity to share their research or to discuss their experience at one of the WISeNet laboratory or field experiment sites with other WISeNet participants.

Abstract: Localization focuses on determining the exact location of a source, robot, person, or otherwise interesting object in a possibly noisy or cluttered environment.  For a growing number of commercial and defense applications, this needs to be done with very high accuracy over long periods of time and for large numbers of objects.  Compared to static arrays or remotely operated mobile sensors, autonomous robots have the potential to accomplish this task more efficiently and with less human intervention.  Stereo vision, i.e., two rigidly connected cameras, represent a promising platform for such systems, as they are lightweight, inexpensive, and provide very rich data

Abstract: Networks are useful mathematical descriptions for many different physical systems, such as the Ising model for interacting particles in a lattice, Feynman diagrams for visualizing the behavior of subatomic particles, and groups of coupled oscillators. More recently, the analysis of complex natural and artificial systems such as ecological food webs, social groups, and the internet has also benefited from a network description by borrowing concepts originally developed for statistical physics. Boolean networks, which consist of linked nodes that take values of 0 or 1, were first introduced in 1969 as a model for genetic regulatory networks [1]. Because of the complexity of real-world Boolean networks, however, progress in understanding the dynamics of such systems has largely been limited to computer simulation. In addition, real-world features of networks like asynchrony and time-delay links are difficult to simulate. I propose the use of digital electronics, specifically field-programmable gate arrays (FPGAs) to better understand both the fundamental properties of Boolean network dynamics, as well as how these properties can be exploited for useful tasks. The combination of small size, low cost, fast speed, and easy configurability of FPGAs make them an ideal platform for building Boolean networks.One promising application for our experimental realization of Boolean networks is reservoir computing (RC). RC is a machine learning paradigm for training recurrent neural networks to perform computation-ally difficult tasks that is inspired by the architecture of natural cognitive systems. Neural-network-based machine learning is already used for tasks as varied as automatically tagging unlabeled images, recognizing human speech, and identifying particle detections in high-energy physics experiments. Training these systems, however, is very computationally expensive. After RC was introduced in 2001 [2, 3], studies using computer simulations found that RC is an effective and extremely efficient computational model compared to traditional neural network computing [4]. In addition, recent RC experiments in physical systems have produced results that are competitive with the state of the art in the field of artificial intelligence [5, 6]. I present the concept of reservoir computing with time-delay autonomous Boolean networks. By building and training a physical reservoir computer using time-delay autonomous Boolean networks on an FPGA, I show that the transient dynamics they produce depend strongly on the connectivity of the reservoir as well as the length of time delays between nodes, and that a well-tuned reservoir can produce chaotic transient dynamics which are nonetheless suitable for machine learning. 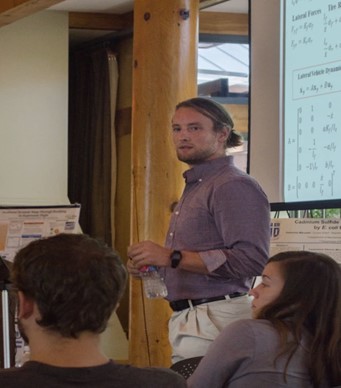 Abstract: In this presentation, I will discuss a comparison of receding horizon and artificial neural network controllers for the modeling of human driver behavior during coupled lateral longitudinal maneuvers. Driver models have been previously developed using control theoretic approaches, such as model predictive control, also known as receding horizon control, and have been shown capable of providing satisfactory vehicle control. However, these models tend to outperform human drivers, for example, due to maneuvers that require high frequency driver compensation, counter-steering behaviors as required to maintain stability, or modeling errors. Furthermore, tuning these driver models to different drivers, automobiles, and road conditions, can be very challenging, and requires expert human intervention. I will show an artificial neural network controller that overcomes these limitations, and, by adapting to the experimental data obtained from the human driver, is capable of reproducing the driver behavior more closely and under a broader range of operating conditions. The receding horizon and neural network controllers are tested and compared to the response of a professional human driver on a closed-course track using data obtained using a high fidelity Ferrari GT driving simulator. The results show that the artificial neural network outperforms the receding horizon controller in mimicking the response of the professional human driver